//
You're reading...
The Wonder of the Cinema

#25 The Hobbit: An Unexpected Journey

The Hobbit: An Unexpected Journey

Martin Freeman as Bilbo Baggins and Ian McKellen as Gandalf

Peter Jackson’s fourth venture into the world to J.R.R. Tolkien is The Hobbit: An Unexpected Journey.  There was much trepidation among reviewers upon hearing that Jackson had opted to split the single tome The Hobbit into three films when each volume of the Lord of the Rings had equated to a single film.  However, the result (thus far) cannot be overlooked.  An Unexpected Journey is a worthy entry into the Tolkien canon.  An adventure story that opts for comedy more often than the increasingly serious Lord of the Rings, An Unexpected Journey is the story of Bilbo Baggins, Gandalf, and thirteen dwarves in their quest to the Lonely Mountain, the dwarves ancestral home.  Bilbo Baggins is ably played by Martin Freeman (Sherlock, Hitchhiker’s Guide to the Galaxy, Love Actually).  Ian McKellen reprises his role as Gandalf the Gray.  Thorin Oakenshield, the leader of the dwarves, is played by Richard Armitage (Robin Hood, Captain America, MI-5).  Additionally there are appearances by Elijah Wood as Frodo Baggins, Ian Holm playing the elderly Bilbo Baggins, Andy Serkis as Gollum, Hugo Weaving as Lord Elrond and (my personal favorite) Cate Blanchett as Lady Galadriel.

I first came upon Cate Blanchett in Elizabeth an epic costume drama detailing the early years of Queen Elizabeth I’s reign.  Blanchett was stunning and garnered a Best Actress Oscar nomination.  A bit of searching on Netflix and I came upon Heartland (sometimes called Burned Bridges) a small Australian series. Here Blanchett is a female police officer in an outback town divided along racial lines.  Here co-star is the wonderfully named Ernie Dingo, who also co-wrote the award winning series.

Fun facts about how much it costs to make a film…

An Unexpected Journey is the first entry of a new trilogy with The Desolation of Smaug and There and Back Again completing the cycle.  I must admit some trepidation that director Peter Jackson will be able to maintain the level of quality throughout the remainder of the trilogy.  There were moments in An Unexpected Journey which (according to some audience members) felt padded and drug on.  I noted that the overall tone of the film is much lighter 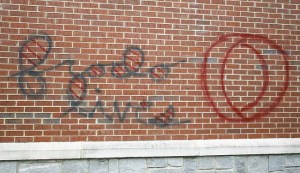 than Lord of the Rings.  No main characters die–Boromir perished in the first film of Lord of the Rings which clearly set the tone for the series–in An Unexpected Journey.  Despite the lighter tone this is still not a children’s film which is odd because The Hobbit was primarily a YA or children’s book when it was published in 1937.  The reading level of the novel is 8.1.  I recall reading it in fourth or fifth grade, an old care-worn copy my father had kept from his college days.  Interestingly there was a time when The Hobbit and Lord of the Rings spawned a kind of pop cult sensation back in the 1960’s as evinced by the “Frodo Lives” graffiti campaign.  However, this was also the time when some hopped up kids also thought Eric Clapton(then a member of the super-power trio Cream) was “God.”

The film is a hefty 2 hours 46 minutes in length and garnered a PG-13 rating from the MPAA.